These two projects exemplify my ability to apply learning theories and technical knowledge associated with instructional design, data collection, and data analysis; to effectively communicate in enriched ways to clearly deliver messages; to engage audiences; and to address legal/ethical/political implications of design in work settings.

The University of Georgia's Division of Academic Enhancement hosts several online modules designed to support undergraduate students in developing fundamental skills like studying, test taking, time management, and more. These webpages are meant to serve as "on-demand" learning and support resources. I created three additional modules to add to the existing collection: communication skills, presentation skills, and group communication. Each module is complete with a video introduction, content pages, and an assessment so the user can monitor their learning. 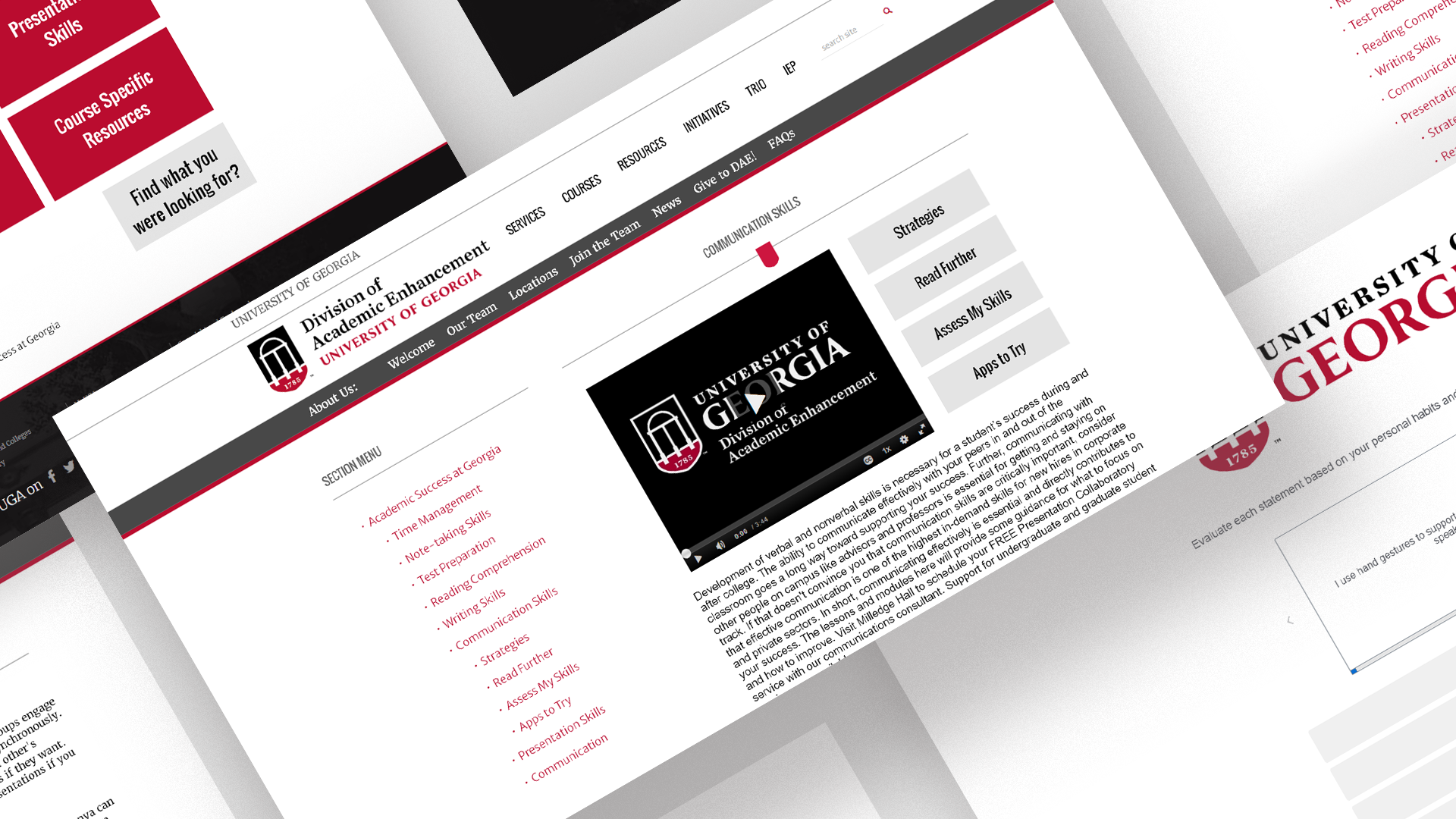 I worked with a client from UGA's Division of Academic Enhancement to create three new academic success modules, replacing an outdated module simply called "verbal communication". This original module was a webpage with more than eighty cascading bullet points and had no organization or content strategy regarding the presentation of the content to learners. It also lacked a video introduction and assessment which all the other modules had. My job was to expand the existing information and repackage it into three completely new modules which would be entirely consistent with the other modules in the resource bank. I conducted research and communicated with a SME to gather, validate, and edit the content which would be hosted on the webpages. I worked with my client to capture her vision for the final product, and I provided regular design reviews throughout the semester detailing my progress toward final development and explaining design decisions as needed. These regular reviews allowed me to seek input from my stakeholders and to incorporate changes early in the design process before content was finalized.

The client expected me to use research and literature to ensure that the material we were presenting was both evidence-based and current. My client encouraged me to work with a PhD student in Communication Studies. She became my SME, and helped me to find research articles and best practices for the development of communication skills. We found a significant body of research surrounding the development of communication skills in pre-professional students, particularly in the medical field. These results were adapted to suit our general audience of undergraduates. I noticed that constructivist approaches were the most common and seemingly the most successful, which makes sense considering that communication is an inherently social and experiential activity. Accordingly, I used a constructivist approach to guide my design for the final modules which was a challenge since the modules are accessed sporadically and are used entirely asynchronously. I worked to incorporate practice segments wherever possible, and also made sure to incorporate models of effective public speakers and communicators. It certainly seems intuitive to give students exemplars of the desired performance and to incorporate opportunities for practice, but these design decisions were made stronger by the support of a body of research and it was easier to justify my work to my client with that support.

This project was unique because I was required to create everything in a format that could be hosted on a webpage that is managed by the University's content management system. This constraint severely limited the kinds of interactions I could use, the format and layout of the pages, and even the style of the content. These modules were also intended to join an existing bank of other resources, and the client rightfully expected that the final design should look consistent with the others. I needed a design tool that would allow me to apply that existing design language, while still being able to manipulate and edit the content quickly so that I could give periodic design reviews for the client. I ultimately decided to learn Adobe XD, a rapid prototyping tool typically used for simple mobile applications and webpages. This allowed me to recreate the webpages exactly as they would appear on the site itself and gave me the ability to present the modules to the client in a high visual fidelity. I also had to learn VideoScribe, a video animation tool, to create the video introductions for my three modules. The existing modules in the resource bank were created using this tool and because consistency was one of my client's major concerns, I learned to use the animation tool to create three new videos for the modules. It works by using a library of objects and animation styles that you place onto a timeline. By setting entry, duration, and exit conditions for each object, you can create an animated video based on imported or recorded audio.

All of the modules use Qualtrics "surveys" to assess the learner in some way. I designed the assessments to give the learner an opportunity to assess their growth in a variety of skills which mapped onto different content areas of the lesson. The learner is given their results at the end of the assessment so they can monitor their learning and depending on their result they may be encouraged to the module a second time or pointed toward additional resources for further learning. The data collected by Qualtrics is anonymized and stored in a database that my client can access at any time. Our goal is to use this data to evaluate the efficacy of the modules and to determine if any particular section of a module is in need of revisions or changes.

The University's website must be accessible to all users, including those who use assistive technologies to interact with the internet. While this is a common concern among instructional designers, it was a central focus for my client. The Division of Academic Enhancement exists to serve all students on campus but usually focuses on serving students who are typically underserved. My client wanted to be certain that the final product would be accessible to everyone not only from the legal standpoint, but also because this is a goal of the Division itself. In this case, I was actually lucky to be working under so many design constraints as the University's content management system and design language was created with this in mind. By following the existing guidelines, I could basically ensure that my modules would be accessible.

While this wasn't the first time I had learned a new technology tool or resource to complete a design task, this was the first time I intentionally sought out new tools as a matter of choice rather than working with a prescribed tool as part of the course requirements. While it was sometimes frustrating to go through the design process in "unfamiliar territory", the advantages of finding and using the right tools from the beginning were clearly felt. This was especially true because I was working with a client who wanted to be able to see progress taking place over the semester and who wanted to provide frequent input over the lifespan of the project. Working on this project, I learned the value of continuous education and improvement as a designer. There's always another tool, solution, or resource out there to learn.

This instructional video was created as the final product for EDIT 6500e. It is a ten-minute video created for novice instrumental musicians who want to learn more about tuning, intonation, and how to listen for tuning issues in their own playing. The video uses simple motion graphics to provide visual explanations for auditory concepts, includes dialogue to walk learners through the material, and provides learners with two practice activities to apply their skills, one of which serves as a closing "self-assessment." 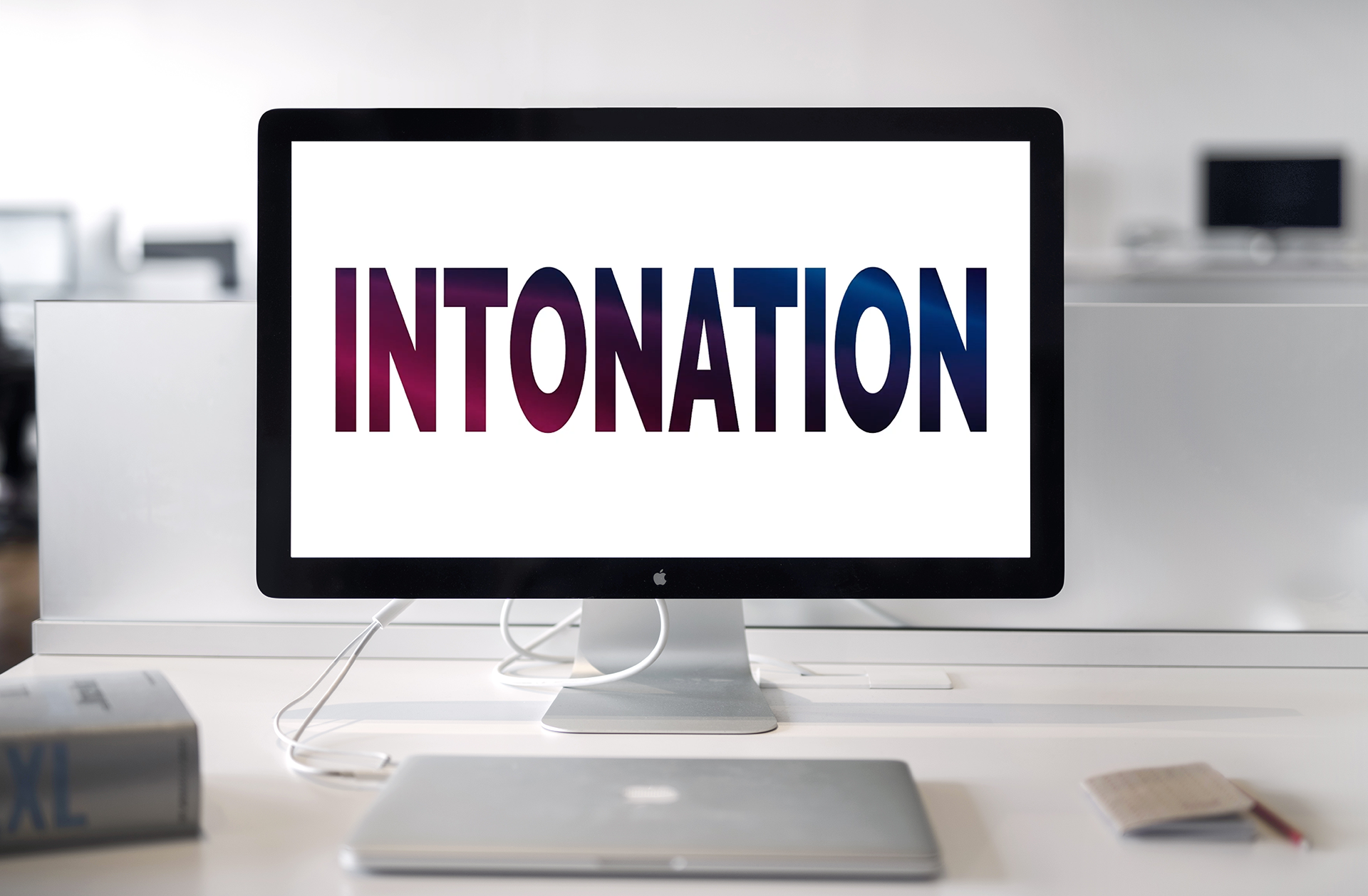 I'm no stranger to instructional videos, but prior to this course I had never written and produced one that was so advanced. In the planning phase of this project, I created a storyboard to map out how individual shots and scenes would look, sound, and function. My previous experience as a teacher has been directly useful in creating written interventions and with planning documents, but I had less experience with creating in an almost purely visual medium. Instructional videos rely on the pacing and spacing of the visuals as much as the audio and the actual content itself. Videos give the designer more control over what the learners will see and hear at a given moment than traditional, instructor-led situations allow. This was an interesting shift and challenge that I enjoyed tackling, and I am proud of the final result.

Video production requires the designer to make different considerations compared to typical curriculum and assessment designs. As a multimedia format, theories of learning and information processing must be taken into account. Cognitivism played a major influence in the design of the final instructional video through the application of Mayer's 12 Principles of Multimedia Learning. I chose to use simple motion graphics in representationally and interpretively, paired with spoken audio to make use of the multimedia principle of pairing words with graphics and the modality principle of using spoken audio rather than on-screen text. The design of my motion graphics was informed by the contiguity principles, keeping labels simple and aligned to the specific part of the graphic to which the apply. The redundancy principle also explains that narratively-explained graphics should not have on-screen text which further encouraged me to keep graphics simple and clear. Throughout the video, especially in the practice activity and the final assessment, the viewer is encouraged to pause the video and rewind to review if needed. This makes use of the segmenting principle.

As a musician, I'm familiar with how copyright and intellectual property rights influence the creation of a final product. Video production must adhere to many of the same limitations in order to ensure the design is created legally without infringement. This is especially true for instructional videos that will be hosted and distributed on websites like YouTube. Of particular concern during my design process was the selection of background music that allowed for use in derivative works. Luckily, YouTube provides a significant audio library of music that can be used either because it is in the public domain or because the owner has licensed it through the Creative Commons. I also had to create my own motion graphics and images from scratch using Photoshop and After Effects because existing graphics that I had wanted to use were not licensable. Although I could claim fair use for this project internally as an educational task, It was important to me that I practice professional and ethical use of intellectual property since it will be a concern as a practitioner in industry.

This project, and entire course, gave me the chance to upskill into more of the Adobe Suite. Being pushed to use Premiere Pro to its fullest potential by cutting together video and audio, applying filters and effects to the video and audio, inserting motion graphics and mask layers, setting up keyframes, using audio cues to plan video segments, and more. I really enjoyed being pushed to use as many features of the software as possible. It was also a change for me to start bringing in other tools to make the final product work. I needed to use Photoshop to create some of the mask graphics and layers for the video, and After Effects helped with some of the more complex animations like the opening audio waveform that is generated from the background audio file. This was also a fantastic opportunity to be very intentional about applying multimedia principles to a design. I was somewhat familiar with the multimedia principles but had never had a chance to incorporate them as thoroughly and with as much planning as this project allowed. 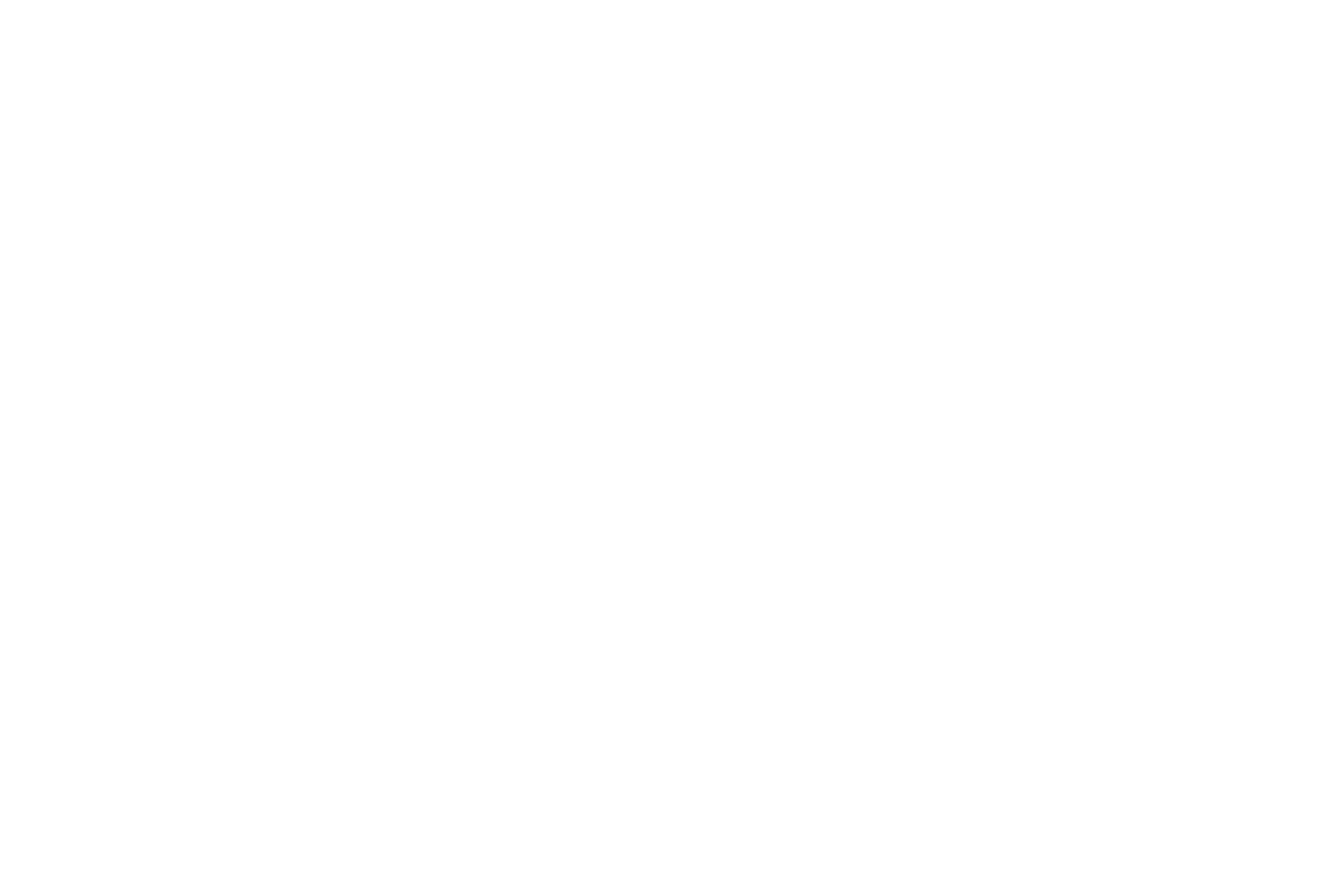